Collecting rents, enforcing contracts, negotiating with the neighbors about the fence, finding a new stove for the tenant on Thanksgiving morning, (really), are all things that our clients pay our company to do, but why?

Take Back Your Weekends

What is your time worth?

Objectively, some might suggest taking your annual salary/income and dividing it by 2080, (the number of work hours in a year, assuming a 40 hour work week). Very tidy and straightforward, but does it really answer the question of what your time is worth? Short answer…no.

The calculation above tells us what your employer or clients think your time is worth, to them, not you. I would submit that the real value of your time is better determined by answering the question, “What is most important to you?”

“FAMILY!” (Most), everyone cries. OK, but what does that mean, can you be more specific?

“TIME WITH FAMILY! (?)”, (you can hear the doubt creep in now). Well yes, but what are you spending your time doing with your family?

My guess is that, if this were all you were doing with your family, changing a toilet at your rental house in Del Paso Heights might be a welcome relief. Mundane tasks are a part of life, they are necessary, but they certainly don’t make up the value of your time.

To me, the value of your time is made up of the legacies you leave and the memories you make. Your kids and spouse will remember mowing the lawn, grocery shopping and watching TV with you, but was it important? 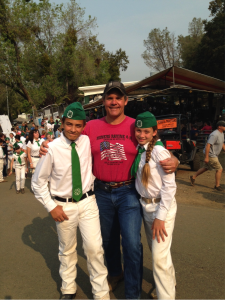 Because my lovely wife and I decided what was important to us, which meant that we spent a large portion of four days under an easy-up pitched six feet from a pig barn. It was quite possibly the cleanest and best kept pig barn you have ever seen, but a pig barn nonetheless…

But WHY?!?! (A little more emphatically now).

Our children, the two young ones you see in the photo anyway, (still cute aren’t they, like puppies; their 22 year old brother is not cute like a puppy, he’s like a dog…), are in 4H and each did a swine project this year.

What’s a swine project you ask? Let me tell you, city slicker…

A swine, (or lamb, or goat, or steer, or poultry, or rabbit), project is one where the youth, (high school or below), takes on the responsibility of raising, training and showing an animal to be sold into the food supply. They receive instruction on the care, feeding and training, (for the show ring), of their animal from a club leader.

Our pigs, Twinkie and Ding-Dong, (Twinkie was white, Ding-Dong was black and white, both presumably delicious, hence the names), were born in February and weighed between 65 and 70 pounds when they arrived at our house in June and weighed 253 and 274 pounds, respectively, when they were sold in mid-September.

The kids awoke at 6:00 AM every day, ALL SUMMER LONG, to feed and water their pigs as well as monitoring their health, (pigs get sunburned for the same reason people do, they get drowsy when they lay in the sun), and weight. They exercised them every morning and evening by walking them around the yard using a crop to direct them. They were sprayed with the hose to cool down, (or, frankly, just because the pigs liked it), and scratched on the belly, (again, just because they liked it).

In the last month and half of the project, the pigs were separated as they needed to be fed differently in order to maximize their potential as show animals. Twinkie needed more muscle and Ding-Dong needed more fat, so the kids went about measuring and mixing custom rations for their pigs as well as washing them every day in preparation for the show.

Show day came and the kids, dressed in their all white uniforms, (I imagine the individual that established the tradition of 4H kids wearing all white while handling farm animals in a barn is still giggling about it to this day, wherever their soul landed. That dark patch on the knee of my son’s pants in the photo? It’s exactly what you think it is), displayed their animals to the livestock judge in an open ring with six to eight other animals in the ring at the same time. Their goal was to remain constantly attentive to the judge, waiting for instruction or answering questions about animal husbandry in general or their animal specifically.

The kids were judged on their ability to successfully manage the showing, (“Showmanship”) of their animal and then the animal was shown again and judged separately in terms of its quality as a market animal, (an animal that was to be sold into the food supply). The livestock judge was a senior in Animal Science at Cal State University Fresno and she had to explain why she chose one youth over another in showmanship as well as grading all of the market animals based on their likely yield as a food product.

On Saturday, the animals are sold at the Junior Livestock Auction, a gala affair where the children are again dressed in their all whites, (lots of bleach used over that weekend), and they display their animals to a crowd of buyers while the auctioneer introduces them and their product for the market.

Most of the buyers at the market were given buyer’s letters anywhere between two weeks and a month before the auction, inviting them to come support the fair and the youngster that has worked hard to raise and sell a product suitable for human consumption. The crowd is overwhelmingly polite and friendly as they are introduced along with a short bio by the auctioneer. Like any fundraising auction, the fact that they start serving beer and wine at 8:00 AM helps considerably with the prices.

After the sale, the animals are sent back up to the barns and they still need to be cared for until the wee hours of Monday morning. Stalls are cleaned, animals are fed, watered and walked, (and played with), in the now vacant show ring.

This all happens before about 7:00 PM on Sunday night. What happens then?

We leave and the animals stay.

The kids who have raised, fed and watered these animals every day for four months get a great big dose of reality square in the face when the moment comes to hop into the pickup and drive away while the animals stay behind in the carefully cleaned stalls. Everyone knew the final destination, but “knowing” logically what is going to happen is different than actually “experiencing” it, and there were tears on the ride home; but it’s important that our children know there is a cost associated with the choices we make. We are blessed in that our society is so wealthy that people no longer need to be familiar with the details of production agriculture, but that doesn’t mean that they shouldn’t.

So, back to my original questions: “What did you do over the weekend?” and “Was it important?”

Well, I spent most of four full days with my wife and children camped, (during the day, we went home at night), next to a pig barn, possibly one of most enjoyable memories my kids will ever have. They ate fair food, cleaned stalls, washed pigs, rode rides and survived the verbal salvos of vendors hawking their wares, all while learning how to produce, market and sell a product fit for human consumption. They learned about costs of production, and that costs aren’t all financial. In short, they took one more step toward growing up.

You bet your ass it was. Remember to take back your weekends!

We are pledged to the letter and spirit of U.S. policy for the achievement of equal housing opportunity throughout the Nation. See Equal Housing Opportunity Statement for more information.

Please fill out this form and we will direct your message to the appropriate person.